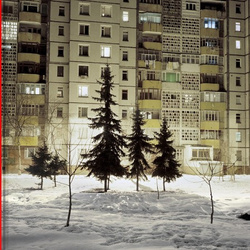 During the independence, Moldova has constantly affirmed its desire to join the European Union. However it is not even part of the accession process yet, and the country’s internal and foreign trade policy remains divided between the influence of Russia and that of the EU. The 2016 elections paved way for the pro-Russian Party of Socialists of Moldova.

The series of photographs explores a human condition; the relationship between identity and home ground.
A young generation of Moldovans are facing changing values, a consuming world of globalisation where is no time or interests in their identity.

The capital Kishnev or Chisinau–used as a background- with memorials and dominant former Soviet architecture connect the collective memory of the nation state.

Whatever a nation chooses to memorialise in physical monument, like architecture based on an ideology, or perhaps more significantly, what not to memorialise, is an indicator of the collective memory even when it’s history is constructed by others or second hand.